Why Canada is so clean and Britain is so dirty

I'm currently in the beautiful city of Halifax, Nova Scotia. For those of you who are scratching the heads thinking where that is, it's in the most Eastern corner of Canada. With glorious sunshine and blue skies, this was a welcome change for me from the continuous rain and drizzle in Cardiff.

It's been almost 20 years now that I have been here and I am probably looking at Canada in a different way, with more than 16 years of experience of life in Wales. One of the things that strike you instantly as you enter Halifax is the enormous space. Everything is wider and broader and bigger. Although the lack of space in Britain may simply be due to its population density (something it shares with other European countries) and geographical condition, it is here in Canada more than anywhere else that some aspects of British life are brought into sharp relief.

One of those sharp differences I noticed as I arrived in Halifax is the breathtaking cleanliness of the city. The litter on British streets is legendary and much commented on, but in a sense I never got used to it and still believe that the way many British people litter their inner cities is a disgrace. The difficult question is however how to change it. The fact is that littering is done by people and people's behaviour is hard to change. Or is it?

Perhaps not so, and the Canadian experience may tell us why. Two things 'conspire' to make Halifax a clean city. Strong social control and relentless enforcement of rules through effective policing. The first is remarkable and easily noticeable as soon as you walk down the streets and reach a traffic light. There is simply no one who dares to cross a road at a red light. Anybody stepping out of line chances to be told off by other pedestrians. Scientists call it social control and it is something, for better or worse, that makes our lives in a city that much more ordered. 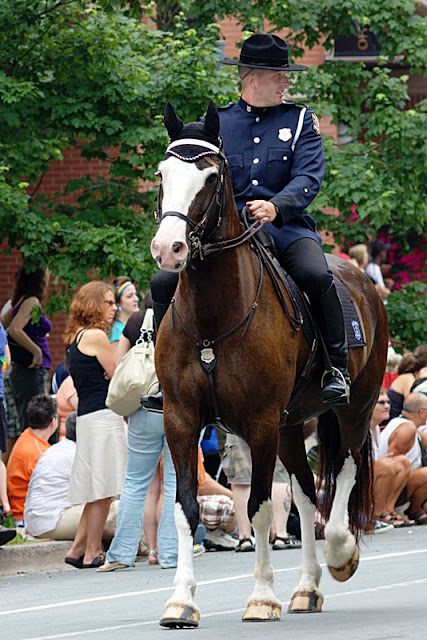 The other aspect however is effective policing and exorbitant fines for littering or anti-social behaviour. None of that exists in Britain and it makes life at home much more difficult I think. Remember the endless discussions about families with children out of control and ASBOs? While the politicians argue about the best regulatory framework to bring people into line, they might just be missing the big picture. There is a fundamental permissiveness in British society that tolerates anti-social behaviour or conduct that is thought unacceptable by a large majority of people. It's simply the failure to articulate that certain behaviour is not right that allows people to behave the way they do.

Britain differs from other European countries in this respect too. Try to cross the road in Cologne or Heidelberg at a red light and you know what I mean. The disapproval by others is instant, visible and possibly even audible. And so it is in here in Halifax. This may not be to everyone's taste but the reward is obvious. It is a breathtakingly clean city with an order that you couldn't find in any similarly sized British town.
Posted by jojo at 17:46