When I lived in Aberdeen I was a keen listener of the shipping forecast every night on BBC Radio. The broadcast exuded a sense of certainty and security while reporting gales and all sorts of weather all over the North Sea. I never found it tedious to listen to it.

This may be the reason why I had little apprehension when I bought James Cook published logbooks of his journeys into the South Sea a couple of years ago. Recently, I finally got round to reading them and I am absolutely gripped by the records of the events unfolding on Cook's three journeys around the world. 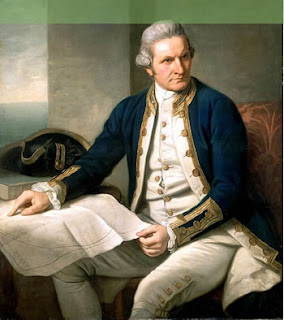 The diaries of the first two journeys are littered with weather and nautical information and it may be those that make them so soothing and re-assuring to me. Yet, the most fascinating aspect of his records lies in the way in which they reflect the novelty of Cook's endeavours and the fact that many of the islands he 'discovers' have actually had contact with European travellers already. I always assumed that Cook and his mates were somehow embarking on a journey into the unknown. But, in fact, time and again he notes carefully any previous visits to the islands by others. Although maps were often erroneous and geographical locations of these islands differed widely from one account to another, many of the islands had had contact with the outer world already when Cook arrived.

Interestingly, Cook also notes a phenomenon that we today may call collective memory. He often noticed on his second and third journey that, when re-visiting islands, he often does not recognise any single individual of the locals in the crowd. What he finds astonishing however is that they ask him and his team often detailed questions about incidences that reflect intimate knowledge about his previous visit. Cook was a good observer and he had often very close contact with locals sharing time and many adventures with them when on the islands.

While the fact that Cook does not recognise many of the faces may simply be because of the low life expectancy in the populations he visited, the fact that something like a memory of his previous visit remained alive amongst the people is difficult to explain. Cook's journals offer countless of these fascinating details about life outside the European culture and his records remains a worthwhile read even after so many years, with or without the nautical paraphernalia.