Tristan and Isolde yesterday at the Welsh Millenium Centre. The biggest star of the Welsh National Opera is still its venue, a house with astounding acoustics and breathtaking views from most places. But the Centre had a serious contender for the top spot in Ann Petersen as Isolde in last night’s performance. Her singing was effortless and her acting was simply impressive. 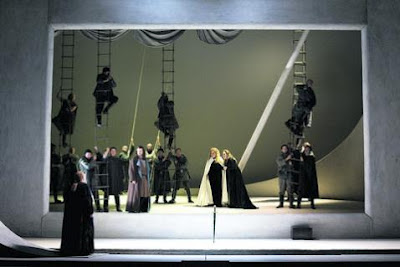 That made it difficult for the male lead, Ben Heppner, who struggled at first but put in a decent performance. Wagner’s tenor roles are fiendishly difficult and taxing to sing and anyone who has listened to Rene Kollo struggling his way through the Ring knows what I mean. Yet, Heppner made good later on, perhaps only hampered sometimes in the more physical moments by the fact that he is not exactly lightfooted which did not always make it a pretty sight to see him move around.
The orchestra started off with a very slow tempo under Lothar Koenigs and experienced some minor jitters at the beginning and, funnily enough, at the very end, but quickly became more surefooted and robust throughout with the exception of the brass section at times. But perhaps that is Wagner’s fault. He does not exactly afford them the comfort of hiding behind the rest of the orchestra and in crucial moments exposes them completely. Who can blame them when their nerves get in the way?

The stage design was a bit pedestrian, yet perhaps this is what this opera needs, allowing me to close my eyes at times and simply listen to the music. Now, everything is sung in German and the lyrics are of course hideously schmaltzy, which sometimes makes you laugh out loud when you are supposed to cry but that might just be because we feel slightly uncomfortable with the saccharine drama of some 19th century music.
All in all, a really enjoyable evening not least because of the supreme voice of Isolde and a very strong and beautiful voice of King Mark (Matthew Best). So go and see it if you can!
Posted by jojo at 02:49